My first thought was that the synapses were seriously misfiring.  Early warning signs of dementia, perhaps.  My second thought was indignation:  I am a student of literature, a former English teacher, for God's sakes.  Why not an Emily Dickinson poem, a snippet of William Blake or a stanza from  William Butler Yeats?  Hell, if it had to be a 60s lyric, why not a few lines from Eleanor Rigby?  But, no, it had to be some drivel from my pre-teen years.

I tried to trace whatever stream of consciousness might have dredged up this silliness by reviewing last night's bedtime routine.   Going on YouTube and catching the Colbert monologue and the latest clips on MSNBC and CNN to check out the chaos and then watching the PBS Newshour to remind myself that not all news centers on the malignant narcissist in the WH and there are still places where some degree of sanity and civility hold sway.  Playing a few hands of Spider Solitaire.  Snuggling down to dreamless sleep.  Nothing out of the ordinary.  It was the same pattern that has been in place for months.

And then I understood.  The last time I expected to wake to nuclear winter was at age 11 during the Cuban Missile Crisis.  I remember the nuns marching us all from classroom to church to have our confessions heard and then reminding us not to argue with our siblings on the walk home or commit any other sins before bedtime so that we might go straight to heaven in the event of a bomb hitting NYC.  The surreal aspect of all this was that it made perfect sense to a Catholic child of that era.

That Catholic child no longer exists.  But life has become surreal again.  Hence, an absurd lyric for an absurd time.

Progress Of A Sort

The bell pull hardware arrived and I will be using the brass for Martha.
I did a bit more work on the afghan, but managed to finish only one other block when I had hoped to finish two in that same time.  I'll have to devote more than two days a week to this project if I want a final finish before Christmas.  The rotation is already imploding under its own weight.  I expect I'll simply start each Monday on the afghan and continue with it until a block is complete and then move on to other projects that week, time permitting.

And, though things are better, I am still doing a fair amount of frogging on the Mystic Tuffet.  So, minimal progress there as well.

Though I promised myself a new start in October, I was so demoralized by my lack of progress on the afghan that I pulled the Celtic Dragon Sampler out a few days early just to lift my spirits.
Posted by riona at 4:26 AM 1 comment:

Stitching in recent months has been all over the spectrum from one-project-at-a-time to flitting from one project to another several times in a day.  There were weeks on end of The Jacobean Elegance Afghan or Bent Creek's The Branch or The Lady Washington Sampler but there has also been restless browsing through the WIP basket and the Up Next binder.

In the past, a systematic rotation has been more my style.  I'd like to get back to that.

So, here's the plan:

As I mentioned, I have been browsing in the Up Next binder and have promised myself the treat of a new start in October.  I have winnowed the choices down to a Victoria Sampler Pumpkin Patch Farm  Sampler or a lovely dragon with loads of intricate Celtic knot bands.  I'll just have to see how the mood takes me when I get to that point.
Posted by riona at 10:10 AM 2 comments: 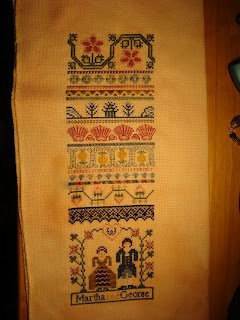 Here is the promised full photo:  Martha, neatly pressed and just waiting to be lined and adorned with bell pull hardware.  I apologize for the indoor lighting. I'll tale a better photo once I get the bell pull hardware and finish it properly.

I thoroughly enjoyed this Morning Glory Designs sampler and will be offering the chart as a giveaway in October to share the joy.   So, if you are interested, check back on 10-4. 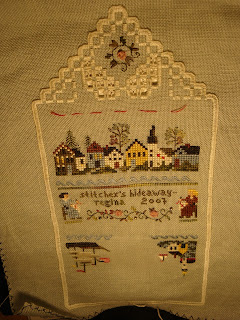 Having finished one class project UFO, it seemed only proper to pull another from the list and try for another finish from the backlog.  This is the Mystic Stitcher's Pocket and Accessories from Victoria Sampler.  It was the project from my first Stitcher's Hideaway and my first class with Thea Dueck way back in October, 2007.   So far I have stitched the pocket, the scissor case, the front and back  covers of the needle book and the fob.  All that remains in the tuffet.
Here are some photos of the completed pieces. 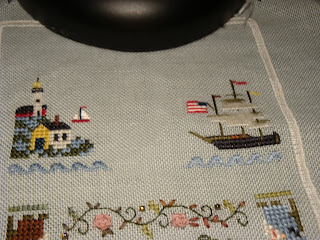 The Pocket: Once this is lined, folded and sewn up, everything will be right side up again.    I finished the pocket in one burst of enthusiasm during and immediately after the class.  But once I got home the siren's call of other projects took over.  Every so often, in the intervening years, I'd pick this up again and work one of the accessories.  Sometimes on a whim, sometimes out of guilt ... but always with a considerable amount of pleasure.  I do enjoy Thea's designs and have a fair few in stash still. 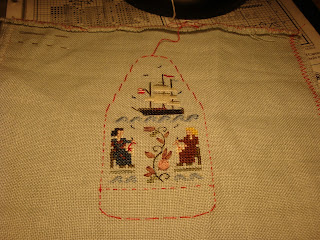 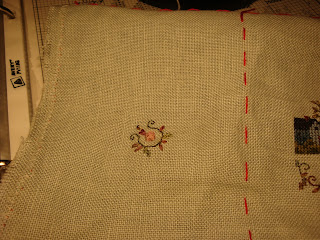 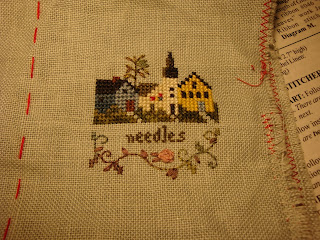 The front cover of the Needle Book  [December 2014] 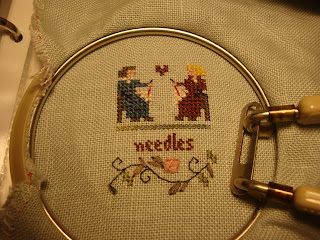 The back cover of the Needle Book [September 2017]


The only remaining piece is the Tuffet [aka, the biscornu]:  And, now, a mere ten years later, I have been struggling with the final piece in the set. Hardangar has never been one of my strengths.  Thus far I have done just as much frogging as I have done stitching, always off by just one or two threads where the stitches should meet.  Even though it'll be a pain in the neck to keep moving the hoop, I have switched to my smaller spring tension hoop.  It holds the fabric more tightly, the better to see and count the individual threads in this rather densely woven fabric.  Lo and behold, it's working.  I stitched a good 40 minutes without frogging.
Posted by riona at 3:36 AM 4 comments:

Martha is a Finish 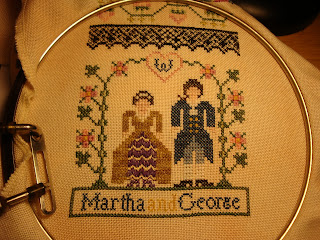 Here is the lady in all her bridal finery.  The gown in golden olive is comprised of 193 tiny rice stitches stitched with one strand and simulating the look of brocade fairly successfully.  It took three days of stop and start stitching to complete the gown.  Aging eyes can slow one down.  The petticoat, in purple and cream is done in satin and back stitch  Smyrna Crosses are used for the pearls in her hair, the lace at her throat and for her shoes.  The original shoes were purple velvet dancing slippers.

Tomorrow there will be a photo of the entire piece, neatly pressed.

I checked on line [Nordic Needle] for some bell pull hardware: and found a lovely one in satin finish brass with a heart charm and another in scrolled pewter.  I haven't made a decision yet but I do think Martha deserves that touch of elegance.

The brass looks very attractive and the heart charm is most appropriate for a wedding sampler.  It has the added advantage of a very clearly centered eyelet for hanging.  The notch at the center of the pewter heart seems a bit more problematic.  It could easily slip off a peg or nail leaving the whole piece hanging drunkenly askew.  But pewter has always been one of my favorite metals for home decor and is a typically Early American material.  The incorporation of the heart into the scroll design fits in nicely with the wedding theme.  I may end up ordering both and making a decision with fabric and hardware in hand.  I'd be interested in any comments from readers as to their own preferences.
Posted by riona at 11:30 PM 3 comments: 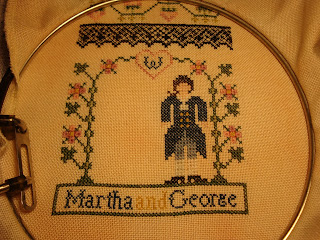 Just Martha seems to have been my stitching focus these past ten days.  And, now, just Martha is all that's's left to stitch.

The Lace Canopy is finally done and I am now on to the Wedding Scene band.   The designer offered alternatives here: stitch the entire band in cross stitch or use a variety of specialty stitches, particularly with regard to Martha's dress.  I am going with the specialty stitches.   Somewhere in my head I can hear Miss Piggy exclaiming, "Quelle surprise!"  But even so, I am being persnickety:  I used a double star for the flower petals and a Rhodes Square for the flower centers instead of the suggested Rapid Stitch.  I like the recommendations for Martha's gown and will be following those instructions to the letter but I wanted a bit more texture and complexity in the flowers.   George, in plain cross stitch, appears all the more sober and forthright surrounded by all the frou-frou.
Posted by riona at 2:35 AM 2 comments:

Apparently dragon charts appeal to only a small percentage of my followers or, like Jo, a fair number of my readers already have their own copies of what's on offer.

Nevertheless, there's still a winner: gwfantasy.  I have e-mailed her [him?] and will send the charts as soon as I have a street address.
Posted by riona at 3:54 AM 1 comment: 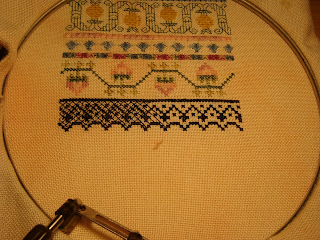 I have finished Band 15 and have moved onto Band 16, a Lace Stitch canopy over the wedding scene, itself.  This band is deceptively time consuming, taking up several days of stitching time.

But with just the scene and the name band left, I will soon be able to cross a class piece off the UFO list.  The first of the year.
Posted by riona at 7:30 AM 2 comments:

Back in the days when my boys were young, my husband and I learned to tread carefully at bed check. 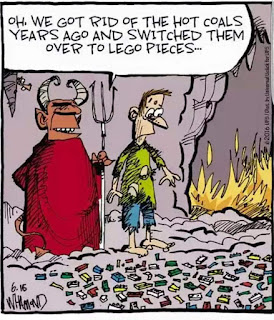 Is it any wonder that we buy Legos for our grandsons' birthday and Christmas gifts?
Posted by riona at 8:16 AM 3 comments:

During August, I worked on #'s 8, 11, 12 and 22  [as marked in blue] from the list.   That means I have stuck closely to stated goals for August.  I just haven't gotten back into sewing and assembly finishing
New Starts: 0
Number of Sewing Finishes:  0
Posted by riona at 6:30 AM 2 comments: